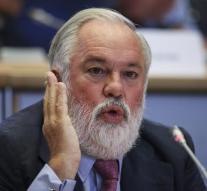 brussels - 'A sad, sad day for the world, the day when the United States rejects the fight against climate change. The EU deeply deplores this unilateral decision. '

That was the first response from Brussels, EU Commissioner Miguel Arias Canete (Climate and Energy) Thursday evening to President Donald Trump's announcement that the US withdraws from the Paris climate agreement from 2015. His predecessor Barack Obama had signed his signature.

Earlier Thursday, European Commission President Jean-Claude Juncker said in an interview with Politico News that the EU should still be in talks with Washington. 'The annoyance of the moment must not derive from the need to have a permanent dialogue with the US. We must try to keep the transatlantic relationship in good condition. '