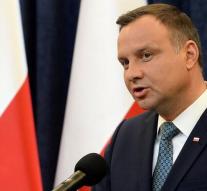 brussels - The European Commission is considering further steps against Poland as the country refuses to amend laws reforming the rule of law. The Polish government has sent a letter from Brussels to 12 letters, rejecting the objections of the committee. According to Warsaw, the measures are in accordance with EU standards.

According to a commissioner, the letter is now being studied in depth, but she said that Brussels believes that the independent rule of law in the country is being systematically threatened.

Violation of EU standards may lead to the removal of Poland's voting rights in the EU. This penalty has never been applied.

Brussels is concerned about four laws that the Government Party Party for Justice and Justice (PiS) give great influence to the judiciary. This gives the Minister of Justice the right to appoint, dismiss, or extend the employment until after retirement. The Supreme Court and the Constitutional Court are also under threat of political control.

The Polish president has now vetoed two of the new laws. He says that his own bills will come.

Poland now says that it is willing to 'dialogue' with Brussels, but only if it is 'free of political elements'. Deputy Prime Minister Frans Timmermans has repeatedly invited the Foreign and Justice Ministers without any results.