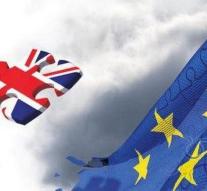 brussels - The European Union and the United Kingdom will resume negotiations on the forthcoming divorce on Monday in Brussels. This fourth round was postponed for a week because of the 'Brexit' speech by British Prime Minister Theresa May last Friday in Florence.

May suggested that London will meet financial obligations, but she did not say what matters in her eyes or how much money it is going to go. The final settlement of the divorce is one of the three main points of the negotiations. 'We are ready to discuss the consequences of this promise,' Barnier said. Barnier also expects more text and explanations about other important topics.

May's proposal Friday for a transitional period of two years after the brexit on March 29, 2019 is not yet on Barniers sign. There, the EU leaders decide first. In more than three weeks, they also determine whether there is 'sufficient progress' on the three main files to start over the future relationship.

Barnier receives Brex minister David Davis on Monday afternoon in the main building of the European Commission. The new round will take four days.