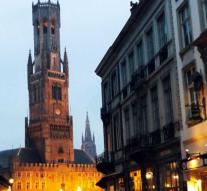 bruges - The cut-throat competition in the Bruges taxi world ended Friday night in a shooting with a taxi driver in the neck, while he had two foreign tourists in the back seat.

That is what the Nieuwsblad reports. That happened on Friday around 23.30 hours, when a driver was shot at by a colleague while he was carrying two foreign tourists. The victim was able to continue driving despite his injury. He was taken to the hospital and would not be in danger of life.

A suspect was arrested, two are still fugitive.

There has been tension in the Bruges taxi environment for a long time, mainly due to a doubling of the number of taxis. The cutthroat competition That was against the sore leg of the already existing group of drivers, who had to watch with dismay that a group of newcomers also went on 'their' market.