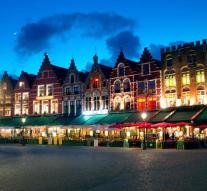 bruges - Tourists and day-trippers leave Bruges ignore since the attacks of March in Brussels. The boats and carriages in the West Flemish draw saw their booking figures in the first half of the year by a fifth to a quarter, says alderman Hilde Decleer (Local Economy) Friday.

More than 400 000 tourists boarded a boat in the first six months, a decrease of over 22 percent. In July, the decline was incidentally below 10 percent.

The figures are a good barometer to know how it is with the Club's economy, says Decleer.,, Since most tourists take a boat, we know that even in the hotels, catering and retail sales fell by a fall on passengers. A sales decline of one fifth is bad, because this percentage is required to make a profit. ''


The attacks and the increased terrorist threat in Belgium scare off tourists, especially those from outside Europe. The hotels and restaurants in Brussels since March 22 complaining bitterly about empty rooms and tables.