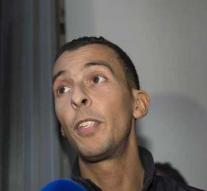 brussels - The older brother of terror suspect Salah Abdeslam remains provisionally in the cell. The 31-year-old Mohamed was arrested last week for involvement in a raid on civil servants in the Brussels borough of Molenbeek.

The council chamber of the court in Brussels extended the pre-trial of him and a co-defendant with a month. The duo denies involvement, their lawyers had asked for their release because there was too little evidence. They can still lodge an appeal.

In the January attack, three officials were forced to pay 70,000 euros under the threat of a knife. They were on their way to a bank to deposit the money.