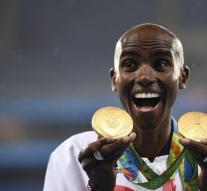 - Mo Farah is everywhere in the UK welcomed with open arms. He knew during the Olympic Games in Rio to repeat his success in London four years. Both times won the British long-distance runner of Somali descent two gold medals.

For his younger brother Ahmed Farah is a very different story. He is about to be sent back to Somalia. He is a prison sentence because he was involved in an armed robbery. Although he has since his second stay in England, the now 27-year-old Ahmed probably deported to Somalia. Foreigners with serious criminal records are indeed sent back to their country of origin.

Ahmed tries to move his brother Mo to intervene. Mo still refuses. The family Farah was distributed at a young age about various family members. With a part of it, including Ahmed, Mo has no contact anymore.


Ahmed also tries to mollify the British authorities by saying that he may be killed if he is returned to his country of origin. The British authorities are still adamant. A spokesman for the Interior Ministry tells The Daily Telegraph that he can not say anything about individual cases. But according to him, no compassion for foreigners who abuse the hospitality of the British by committing crimes.