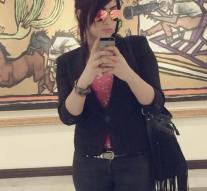 lahore - The brother of Qandeel Baloch, a Pakistani celebrity social media, was arrested for the murder of his sister.

According to a Pakistani newspaper he confessed the murder. He stated that he had been drugged and strangled Qandeel,, for dishonoring the name Baloch '. The 26-year-old Qandeel Baloch became known for posting racy, sometimes raunchy, photos and videos. She wanted thereby exposing the strict morals in her country.

Wasim, the brother of Qandeel Baloch.

Baloch, which was also called the Kim Kardashian of Pakistan, was strangled in her bedroom in the family house in the city of Multan, then her father called the police. The brother had disappeared after the murder.

In Pakistan, each year more than five hundred people, mostly women, victims of honor crimes. They are often killed by their own families, to shame inflicted to erase the community.