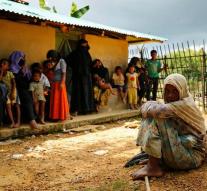 london - Great Britain has asked for an emergency meeting of the Security Council. About the escalating violence between the ethnic Muslim group Rohingya and the security forces in Myanmar. The session should take place on wednesday.

According to British ambassador Matthew Rycroft at the United Nations, urgent agreements are needed about the state of Rakhine, a state of Myanmar. Rohingya's Muslim militants are constantly attacking, with tens of thousands of deaths falling. As a result, security forces are acting against them with great violence.

Many Rohingya members have fled to neighboring Bangladesh in the past, but frontiers in that country are currently opposed to most Muslims. In the predominantly Buddhist Myanmar, the Rohingya can not become a citizen. They are considered illegal and are thus virtually straightforward.

The session should take place on wednesday.