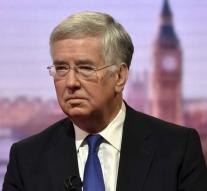 london - Oil fields in eastern Syria were the first targets of the attacks by British bombers Thursday in that country. That the British Defence Secretary Michael Fallon explained.

The jets took off several hours after the British Parliament agreed to bombing targets Islamic State (IS) in Syria. The minister said the bombings were successful.