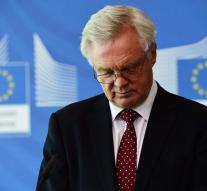 brussels - The British Government expects the European Union to be flexible and propose in the negotiations on the separation of the United Kingdom and the EU. This said the British minister for the brexit David Davis at the start of a new round of negotiations in Brussels.

However, according to EU chief negotiator Michel Barnier, London has to present proposals that are unambiguous. The British have supplied several documents 'we have studied carefully', according to Barnier, but on the basis of which sufficient progress can not be made.

He pointed out that the Member States and the European Parliament first agreed on the rights of citizens after the brexit, the financial settlement and the future situation at the British-Irish border. Another way 'we can not accept. '

London wants to talk as soon as possible about the future relationship with the EU.