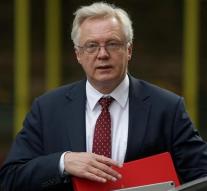 london/brussels - After leaving the European Union (EU) in March 2019, the United Kingdom wants to form a temporary customs union with the EU. That plan has announced the British government. Last weekend, two ministers wrote in an opinion that the United Kingdom wants a transition period after brexit, so that no chaos is created and companies know what they are up to.

Minister David Davis, responsible for the brexit, believes that a temporary settlement should not cost its country. He said that the transition period would probably take about two years. As far as Davis is concerned, in any event, after the British elections scheduled for 2022, a final settlement must be made.

The EU has informed the British proposals 'carefully study', but said that first, sufficient progress should be made with the brexit plans. We are aware of the British preferences for a transitional period and future relationship, but only if sufficient progress has been made regarding the conditions for departure, the European Commission writes in a statement. The EU's daily governance reiterated that an agreement on the future relationship can not be finalized unless the British have left the union.

In a customs union, countries work together in the field of trade and are not subject to customs tariffs. Just as is the case now, the British Government wants the free movement of goods to remain in force.

Negotiations on the divorce conditions will continue in Brussels in late August.