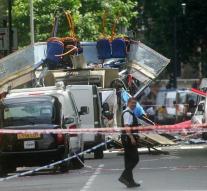 london - Around two thirds of hundreds of imprisoned terrorists in Britain is vacant or is that already. Most of them walk around freely without having participated in deradicalisation programs in prison. They have refused in the cell. Sky News came to this conclusion after examining terrorists who were arrested last decade.

About three-quarters of the 583 convicted terrorist prisoners of the past 15 years are now back on British streets. It would be 418 ex-prisoners. The study September 11, 2001, the day of the attacks in New York, taken as the start date. Many of these freed terrorists still have the same extremist beliefs as before their arrest.

Of the 418 released prisoners terror many have al-Qaeda background. Among them are three men holding the four London suicide bombers have helped in the planning of the attacks in London on July 7, 2005, where 52 people were killed. Seven men after the London bombings were part of the wider circle around the failed attempt on July 21 are at large.

Lord David Blunkett, a British politician who oversaw much oversight of this terrorist convictions, said there should be a more robust program for good to those who monitor back into the community.

Ex-jihadi Hanif Qadir leading a counter-extremism program. He says the deradicaliseringsregeling in prison is 'miserable failure'. 'There are experts who are able to tackle the problem, but they are not the ones doing in prison. 'There are currently too few prison imams to the problem of radicalization in prisons right tackle, says Qadir. Some of those who refused to cooperate with the deradicalisation programs in prison are already reoffend.

Richard Walton, a former anti-terror chief of Scotland Yard, said that 'very few' of the IS-related terror convicts are reformed. He told Sky News: 'It seems that this version of Islam is so strong that once someone has been brainwashed with this ideology, it is almost irreversible. '