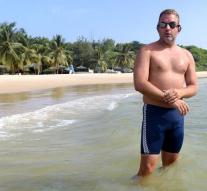 london - The Briton who first wanted to swim the Atlantic ceased his record. The 38-year-old Ben Hooper was November 13th in Dakar (Senegal) to water with the intent to crawl Natal (Brazil). He came in over a month, no more than 140 kilometers. Rough seas, sharks, jellyfish stings and imminent shortage of supplies went to give him decide.

The former police officer from Cheltenham showed himself told Sky News, however, a great optimist. 'We have NOT failed; We have acquired the knowledge to succeed in the future, 'he responded. Hooper had the special swim already established that he continues to try 'as long as he has only one leg and one arm over. '

The crossing would be in a straight line is 3,000 kilometers thick but Hooper had already frightened suspicion that there still could be something to come by currents and drift during the night on the accompanying catamaran. The plan was for 140 days swimming every ten hours in two sessions with short breaks to eat. Given the pace Hooper developed he would have spent two years in order to reach the other side. He will now do sailing.