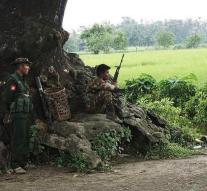 london - Britain strikes an 'educational program' for the forces in Myanmar because of the humanitarian crisis in that country. According to the British Government, the program can only be resumed if an 'acceptable solution has been found for the current situation.'

According to Sky News since 2014, London has spent 650, 000 pounds (around 733,000 euros) in training Myanmarian soldiers. It was not about combat training, but for lessons on subjects such as ethics, human rights, democracy and the rule of law.

The British government called on the Myanmar army on Tuesday to take immediate action to end the violence in the state of Rakhine. The security of all citizens must also be guaranteed, according to a government spokesman in a written statement. The latter statement is a reference to the horrors that would have been given to the Rohingya, a Muslim minority.