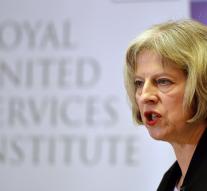 london - In Britain comes Sunday morning, the National Security Office (COBRA) met because of the deadly attacks in Paris Friday. During the emergency meeting will discuss counter-terrorism measures taken by the British government. Minister of the Interior Theresa May will lead the meeting.

Prime Minister David Cameron HAS Saturday an emergency meeting of the security cabinet. He said afterwards that the threat level in Britain has not been increased.