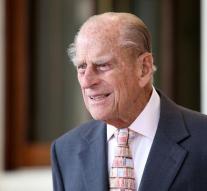 london - Prince Philip, 96-year-old spouse of British Queen Elizabeth, has his last official public performance on Wednesday afternoon. After 65 years of faithful service to his queen and wife, he retires and will accompany his wife only occasionally. The 91-year-old queen, who has been on the throne for 65 years, does not intend to take it easy.

On Wednesday afternoon the prince will attend a parade of the Royal Navy, of which he is Captain General. Because he married the queen, he had to give up a promising career in the navy. Queen Elizabeth calls her husband her 'support and devotion.' 'He is seen as the most important factor that allows the Queen's long reign.

The prince is known for the loose way he has always been in his position. Visually he did not always feel as much in his obligations and often made inappropriate comments. This informal style, a contrast with British stiffness, also made him a favorite.