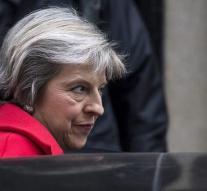 brussels - EU Minister Donald Tusk has not invited the British Prime Minister Theresa May for dinner with her colleagues at the EU summit in Brussels on December 15. It appears from the program that was released Thursday. The top is closed 'with an informal dinner with 27 heads of state and government', says the program. May or may join at lunch.

Tusk also abandons the traditional two-day meeting of the 28 EU leaders. He keeps it in one day, starting earlier and hopes to avoid nocturnal negotiations.

If successful, the question is. The top is partly devoted to the Dutch referendum on Ukraine. Prime Minister Mark Rutte hopes that his European colleagues to find a solution for the 'no' of the Dutch population against the association agreement between the EU and Ukraine.