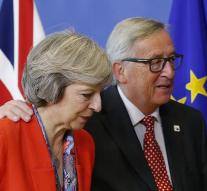 brussels - British Prime Minister Theresa May holds Friday telephone conversation with the President of the European Commission, Jean-Claude Juncker. That confirmed the spokesperson of the committee Thursday in Brussels. The agreement comes at the request of London.

The spokesman declined to say which is the call. Brussels also would not comment on the decision of a British court, the High Court Thursday morning, certain that the British government needs the approval of the British Parliament to set the process in motion to withdraw from the EU. Prior to the referendum on a Brexit a majority in the British Parliament against leaving the EU.

Brussels has always said not to interfere in the matter until the British government officially announced that it would invoke Article 50, that the negotiations on retirement officially begin.