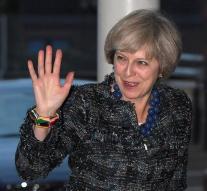 - British Prime Minister Theresa May said Sunday at the congress of her Conservative Party in Birmingham that they enable the EU in late March formally informed of the departure of its country from the European Union (brexit).

May said her government will continue the brexit and will make it a success. Not all Conservatives think they can. But the main Conservative supporters of EU membership, former Prime Minister David Cameron and former Finance Minister George Osborne, do not show their faces at the conference, according to British media.

To actually leave the EU, a Member State of the European Council, so the EU summit and the leaders of the other Member States, formally notify the intention to withdraw from the union. In Article 50 of the Lisbon Treaty (2007) stipulates that the parties then have to arrange how they proceed in two years. If not, then lapses in principle the membership of the country that way.

Many in and outside the UK are concerned that the negotiations will last longer. Then the British would fall into a legal vacuum. There was, therefore, in London no hurry to officially announce the brexit. It's been one hundred days since a small majority voted in a referendum on leaving the EU. It took Cameron among others his job and May followed him in July.

Saturday May has already told British media that she wants to present to abolish the law by the European Communities from 1972 to the parliament in the spring.