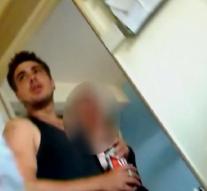 london - The British police went through the drug after the murder of a disabled Iranian refugee who was wrong for a pedophile.

The man, according to the BBC, was in vain for years in vain, among other things because he was threatened with death. A neighbor killed him later and burned the body.

The Independent Police Complaints Commission (IPCC) published a devastating report on the case on Wednesday. Victim Bijan Ebrahimi made dozens of times his regret about his aggressive neighbors, but was not believed. 'He was seen as a liar, a suicide suit and an attention seeker,' concluded the commission.