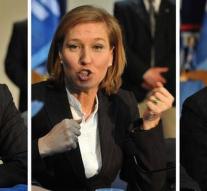 Livni was this week in Britain. Scotland Yard asked Livni Thursday to come for an interview, so Sunday was announced. By making an appointment with a British diplomat, her visit was a state affair to be seen and she got diplomatic immunity. Thereby contacting the police off the track.