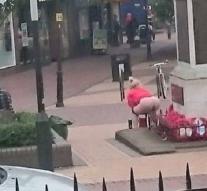 grays - A woman in broad daylight would have urinated on a war memorial, was arrested by the British police. Photos of urinating woman Friday in the center of the city Grays went around over the internet and caused outrage among the population.

It is a 42-year-old woman from the neighborhood of Grays, east of London, British media said Saturday.

The outrage over the incident was all the greater because Britain Friday commemorated the Battle of the Somme. That is the bloodiest battle in British history with 420. 000 Britons lost their lives.


The memorial commemorates fallen British in the First and Second World War and the Korean War.