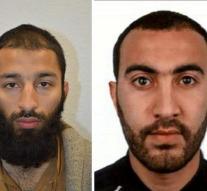 london - The British police announced Monday the names of two terrorists who sow death and ruin on the London Bridge and around it on Saturday night. It is about Khuram Shazad Butt (27) and Rachid Redouane (30).

The first, born in Pakistan but in possession of a British passport, was known to the intelligence service MI5. Proof that he would prepare an attack was not there. Redouane, who had a Moroccan and Libyan background, was unknown to the authorities.

There is still investigation into the identity of the third actor of the terrorist act, which killed seven people and injured dozens.