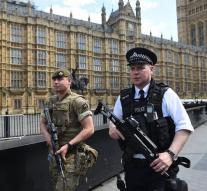 manchester - The British police are looking for a network that is behind the bombing of Monday night in Manchester. This said the police chief of the region, Ian Hopkins, on Wednesday.

It is about accomplices of 22-year-old Salman Abedi who resigned as a jihadist for the performance of a concert hall filled with mostly teens. As a result, 22 people were killed and more than sixty people were injured.

The police suspect that Abedi did not make the bomb himself, but that an expert bomber did it for him. The authorities fear that the network wants more attacks.

In the context of the investigation, a search was made on Wednesday in Manchester on Wednesday. The search was in the center of the city and, for the time being, a railway line has been shut down, according to police. There have now been four people arrested in connection with the attack. It is not known what exactly they are suspected or who they are.