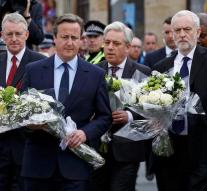 london - The political parties in Britain resume their campaigns Sunday for the referendum on whether the country should remain in the EU. The parties gave up their campaigns after the assassination of Member of Parliament Jo Cox Thursday.

Cox was shot in the city of Birstall and stabbed after a meeting with voters.

British media began campaigns Sunday again fully. As Prime Minister David Cameron warned the BBC once again that a departure from the EU is a,, big mistake. ' The Sunday Telegraph called his party colleague Michael Gove just a Britain without the 'Brussels' dominion'.