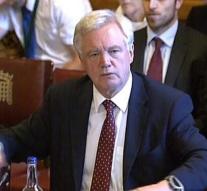 - "The British Parliament must approve parts of the brexit new legislation. This confirmed Tuesday the minister responsible for the implementation of the parting of the EU, \"brexit Minister 'David Davis. In the British Parliament there is no majority for a departure from the EU."

"Davis told MPs that there is no doubt that there are certain laws should be changed or to withdraw from the EU. He cited as an example the law on the European Communities from 1972. Thus, the UK joined the then EEC. In the law are texts which indicate that European legislation over the British state. He also mentioned a reform law of 2010 (Constitutional Reform and Governance Act) which states that the parliament a treaty that would conclude the government can block through a certain procedure."