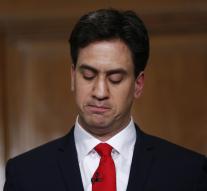 london - Although the British media for absolutely normal to give their readers a voting recommendation, the Daily Telegraph has now been punished for. Privacy watchdog ICO, the newspaper fined 30,000 pounds (40,000 euros), as editor in chief Chris Evans on May 7, the day of the elections, hundreds of thousands of readers sent an email in which he called them to the Conservative Party of Prime Minister David Cameron to vote.

Evans called the election in writing the most important since 1979 and agitated against the leftmost Labour leader of this generation , referring to the then party leader Ed Miliband. Which has since been replaced by Jeremy Corbyn, which has a major left-wing image.

Although a newspaper's okay to have an opinion, has the Daily Telegraph with the e-mail crossed a border . The e-mail came the day itself some criticism from readers who said they had signed up for a newsletter and not for political propaganda.

The elections incidentally turned out on a victory for the conservatives.