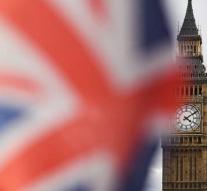 london - The British government of Prime Minister Theresa May has gained green light to continue with the Brexit. The Lagerhuis voted in the night of Monday on Tuesday after hours of debate with the retirement law. The law was adopted by 326 for and 290 votes against.

The retirement law allows the government to proceed to the next stage of the process of breaking the political, financial and legal ties with the European Union. According to Labor opposition party that voted against the law, various parts of the law lead to an infringement of the separation of power and a 'power takeover' by the government.

May showed satisfaction with the outcome of the vote. 'We can now continue negotiations with a strong basis,' she responded. 'Parliament has taken the historic step to support the will of the British people and has agreed to a law that provides certainty and clarity for our departure from the EU. '

The so-called EU Withdrawal Bill has a long way to go. For example, European law must be transposed into British laws. 'We encourage parliamentarians from all parts of Britain to work together in drafting these important laws,' May called a call to her colleagues.