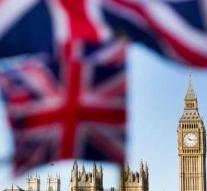 amsterdam - London shuddered, tens of thousands of jobs in the financial sector would disappear after the announcement of the brexit. The departure from the EU is much less bad for the City.

In recent months, the number of financial jobs that have to be relocated due to brexit appears to have declined significantly in the past six months, a survey by data processor Reuters shows.

Banks, insurers and financial service providers would move at most five thousand jobs, half of the previous forecast, to the mainland.

The so-called Brexit Tracker from service provider EY Financial Services in December showed that 68 companies in the City in this sector were looking at about 10. 500 jobs that had to be moved from Great Britain.

The Reuters survey at 119 companies shows that Paris overtook competitor Frankfurt as the potentially top location for a Brexit flight for British companies.

Data processor Reuters reports that some banks have lowered their prognosis for the jobs they need to relocate because they find that much remains necessary for their current work.

The progress of the lectures between London and the EU also plays a role. Last week, EU Chief Negotiator Michel Barnier confirmed that a Brexit Transition Agreement has been concluded until 31 December 2020. That gives companies space.