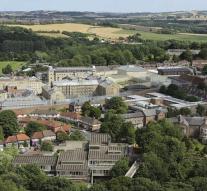 london - Thousands of guards on Tuesday in Britain stopped work. They are furious about the increase in violence in British prisons. The government is now trying with a lawsuit to get to work the guards again.

Keepers prison in England and Wales should not strike under the law, but laid more than ten thousand of them down work. The strike began at midnight and lasts 24 hours.

Earlier this month came the British government plans to improve safety. That is according to Justice Minister Liz Truss 'priority number one', she said Tuesday in parliament. They condemned the strike and said that this right people are endangered.

The past years have been in several British prisons incidents. Earlier this month, inmates even took some of the prison in Bedford, in central England, on.