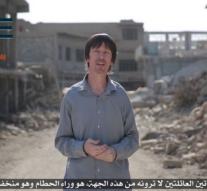 london - British journalist John Cantlie, which is being held hostage since 2012 by jihadists, is to see a new propaganda video by Islamic State (IS). The video talks about the hostage bombing at the University of Mosul, British media reported Wednesday.

Cantlie looks at the video noticeably thinner since he was last seen on 19 March. In a long shirt and black pants he tells viewers that he represents the remains of the university. 'You have to ask yourself, why the coalition has decided to destroy the university,' he says.

The journalist born in Hampshire was kidnapped in Syria in November 2012, during his second visit to report on the war in the country. In the video in March Cantlie also appeared in Mosul. He was portrayed as if he was reading a news story.


When he stood at bombed hideouts near a main road, asking why the US using airplanes to destroy kiosks that are used to distribute IS propaganda leaflets and 'cost only $ 50 to build.' 'America has successfully destroyed a media kiosk Islamic State After twenty months and five billion dollars. ''

The British Foreign Office said on being informed of the new video and 'to analyze its contents. '