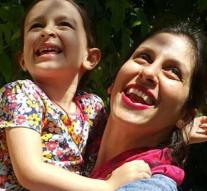 teheran - The British-Iranian Nazanin Zaghari-Ratcliffe, who is serving five years in prison in Iran for espionage, is on leave outside the Evin prison for the first time in two years. She is free for three days from Thursday and even reunited with her four-year-old daughter Gabriella who is housed in a family in Iran.

Her lawyer and her husband, Richard Ratcliffe, hope that the three-day leave can be extended. The prison sentence of Zaghari-Ratcliffe overshadowed British-Iranian relations for two years and became even more and more negative when the British Foreign Minister, Boris Johnson, publicly let things go that made her case more difficult.