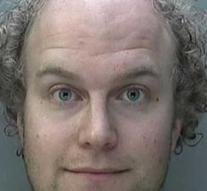 birmingham - A British academic has been sentenced to 32 years in prison for extorting dozens of people. Matthew Falder (29) forced his victims to film themselves while performing degrading and traumatizing tasks. Among other things, it was about eating dog food and licking a toilet seat, reports British media.

The man pretended to be a female artist on the internet. He asked people for nude photos that he supposedly wanted to use when making artworks. Falder actually used these images to extort his victims. He also placed hidden cameras in public toilets.