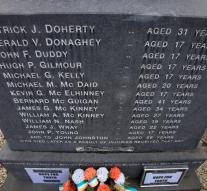 london - The former British soldier who was arrested Tuesday for his involvement in a massacre in Northern Ireland in 1972, has been released on bail. He was, according to the BBC questioned in connection with the deaths of three people in the Northern Ireland Londonderry during the massacre which went down in history as Bloody Sunday.

British soldiers on January 30, 1972 opened fire on peaceful protesters, they banned by the authorities beforehand, kept march for civil rights. In total, fourteen protesters, mainly youths, were killed. The 66-year-old man who was arrested Tuesday belonged to the parachute regiment of the British Army.

The massacre remains one of the most famous events of The Troubles, the violent conflict in Northern Ireland, which came at the end formally in 1998. The Irish rock band U2 made ​​it the number on Bloody Sunday.