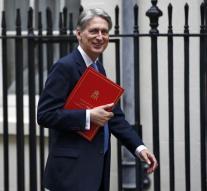 london - The new British finance minister Philip Hammond does not come with an emergency budget to the negative consequences of the choice of leaving the European Union (Brexit) to absorb.

He said Thursday, on his first day in his new job. Hammond wants as quickly as possible to make a deal with the EU, SkyNews reported.

Hammonds predecessor George Osborne warned the referendum on Brexit of June 23 that his ministry would be trouble by a departure from the EU. A small majority chose. Osborne provided huge tax increases and additional cuts.


Hammond was foreign minister and advocate of EU membership. He has previously argued that the choice of the brexit would cause the British economy,, cools and causes a lot of uncertainty '', with all the economic consequences. Now Hammond must as finance minister trying to keep the uncertainty within bounds.