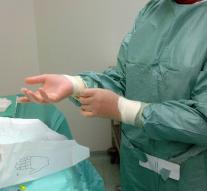 amsterdam - The UK health floats on foreign doctors and nurses. More than a third of the doctors employed by the NHS NHS was not born in the UK.


It is also another more than 20 percent of nurses of foreign origin. Thus, there is no country in Europe except Luxembourg that his health is so dependent on foreign staff as Britain. According to figures gathered by the Organisation for Economic Co-operation and Development.
Most foreign doctors and nurses are from India or the Philippines.
Critics say too few doctors are trained in the UK. Also, too little is done to prevent British doctors emigrating.
Ironically enough because the UK is also one of the leading exporters of medical personnel. More than 50 000 British nurses and 17 000 doctors have left the country to work elsewhere.
NEW