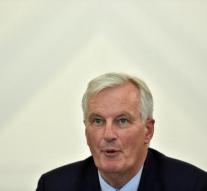 brussels - The rights of non-UK EU citizens living, working and studying in Britain now, are insufficiently guaranteed after brexit. They must be able to continue their lives as they now have the same guarantees as the British living in an EU Member State.

That's what EU chief trader Michel Barnier said in Brussels on Wednesday. The British government has offered to give EU citizens in the United Kingdom a special status, and to guarantee it under British law. But Barnier pointed out that circumstances in the country can change, and that is why the European Court of Justice must (keep) on their rights.

The negotiations between London and the EU are resumed on Monday. Barnier said that political agreement must first be reached on the road to divorce before technical negotiations can begin. 'And the clock tickes,' he warned.