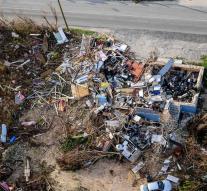 london - It costs the British government to finance aid for the Caribbean islands affected by Hurricane Irma. She can not legally claim money for international assistance, reports British media Thursday.

The 'pot' for international aid has been converted to a total of 14.4 billion euros, but the law sets conditions for its use. And on paper, the heavily affected islands such as Anguilla and the British Virgin Islands are too rich for assistance from this stock of money.

British media report that the restrictive terms have been prepared internationally by the Organization for Economic Cooperation and Development (OECD). They are anchored in British law and the government is therefore forced to drill other sources for the money needed for aid to the British Caribbean Isles.

British officials have assured that nothing will stop the government from helping the islands. Foreign Minister Boris Johnson went to the disaster area this week and more than 60 million euros have been sent to help. It is feared that the reconstruction of the British Isles will cost 800 million euros.