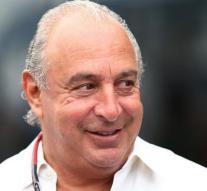 london - Because he robbed many people of their jobs and pensions, the British billionaire Philip Green is relieved of the knighthood. It is the first time that Britain formally proceeding to this step. Thursday voted a majority of the parliament for taking the title.

Green was fifteen years owner of BHS, a chain of 180 outlet stores before he sold the ailing company for one pound of entrepreneur Dominic Chapell. It is known that he let companies go bankrupt. After the sale, the store actually went bankrupt and lost 11. 000 workers their jobs.

The staff and also the now retired employees may also partly whistle for their retirement because BHS had a pension shortfall of 571 million pounds (639 million euros). If this amount is not completed, are 20. 000 people a large part of their retirement income lost.

Green was knighted in 2006 for services to retailers.