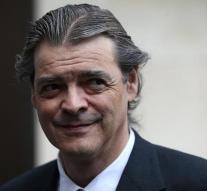 london - A British aristocracy was found guilty by a London court to threaten a fierce opponent of the Brexit on the internet. Rhodri Colwyn Philipps (50), St. Davids fourth burggraph, had given Facebook a 'reward' of over 5500 euros for those who would 'cross over' Gina Miller.

He called Miller in this regard 'this terribly annoying first generation immigrant'. In addition, he called her a 'bootspringer' that had to be sent back to the 'smelly jungles'.

The Miller born in Brits Guiana (now Guyana) came into the news by winning a case against the government that would have to ask permission for parliament to start the brexit.

Colwyn Philipps called his lyrics satire. The court concluded that it was racist and threatening language. He will probably hear his punishment Thursday.