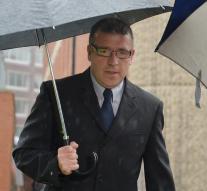 south yorkshire - British police officer Adrian Pogmore was sentenced to a year of imprisonment for a year because he filmed people from the police helicopter who were having sex or sunbathing.

According to The Sun, on the images he made it was possible to have a bunch of sex on their patio.

The couple who want to remain anonymous for privacy reasons, the 51-year-old Pogmore already had a network of people who sometimes exchanged a partner. Pogmore had earlier sex with the woman. The couple did not know at court that indeed made part of the swingers scene. However, they tried to leave this behind since 2009. Before that time, the couple had sex in the garden once a week when the weather allowed it, they told the court.

'Now that we've gone on with our lives and we're no longer part of the swingers scene, I'm very embarrassed that these images have been brought to the attention of police through this road,' said the woman in court.

The prosecutors call the man a swinging (one of partner exchange, rescued.) By sex obsessed air attendant.

Other images showed how to sunbathe a naked woman in her garden. Naturists have also been filmed for their caravan.