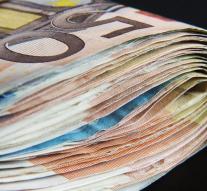 wurzburg - A 62-year-old Briton has unwittingly Saturday a 'money rain' caused by the German highway. After refueling, he had here are particularly well-stocked purse on the roof of his car laid along the A31 from Würzburg and subsequently forgotten.

With a swirling cloud banknotes behind drove the Briton then moments later on the A31 southbound. When he noticed his mistake had been several thousands of euros blown across the road. The money was said the police ' all lanes' which only a small part of the bygone capital could be found. Several other drivers got out to steal a ticket.