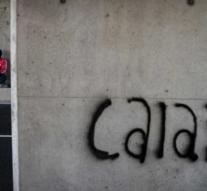 - A migrant from Eritrea on Sunday on the French A16 motorway in the port city of Calais killed by a British driver. It is not the first time that a refugee in or near Calais is killed.

In the city entrench themselves thousands of people from the Middle East and Africa who want to cross to Britain. They try to run through the Channel Tunnel, or hide in trucks or cars.

The man from Eritrea belonged to a group of refugees obstacles in trying to explain the way in order to allow traffic to slow down and be able to climb on a car, police said in Calais.