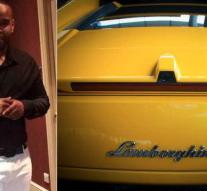 dubai - A 26-year-old British speed demon who thought he could drive through Dubai in the middle of the night with 230 km / h, is allowed to tune 30,000 euros. The man did not notice that he was being flashed.

Farah Hashi from Newport in Wales had rented a yellow Lamborghini with a value of nearly three tons and seized his chance to make some speed.

To be able to drive really well, he decided to get in the car at 3:30 in the morning. For four hours he drove fast on the Sheikh Zayed highway. He would have flashed there by all the cameras present, writes Daily Mail. Twelve times he drove faster than 200 km / h, he was also flashed twice within a minute. In total, the man was caught 33 times.

The fine, converted 40,000 euros, went to the car rental company that decided not to take the car for a while and to keep the passport of the man for the time being. Hashi could not pay the fine and was forced to stay in Dubai for a week longer without a passport. After a reduction of 10 000 euros, the Briton finally agreed. It is unclear whether the man, who normally drives a Vauxhall Corsa, is already at home.