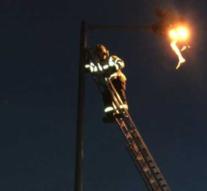 birmingham - A man in enigmatic manner climbed a ten meter high lamppost in Britain. Descending proved to be more difficult: the emergency services had to turn out to free the climber from his awkward position, the BBC reported.

The fire brigade spread pictures of the striking rescue action via Twitter. You can see how a large ladder is put in position to relieve the climber. A spokesman for the service is in the dark about how the man managed to reach the top of the enormous lamppost. He was probably under the influence of drugs.

The ambulance service in the area said that the climber was only injured by his hand. He was transferred to the hospital. The emergency services in Birmingham, according to a police spokeswoman, needed about an hour to get the man off the post.