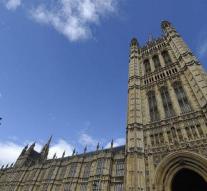 london - A 23-year-old Englishman is suspected of having raped a woman in the British Parliament. The man would have struck last Friday.

British media report that the man would have trespassed in the early morning to a woman. A police spokesman in London stressed that the victim is not a Member.

The man was arrested a few hours after his alleged act. He has since been released on bail and is to appear in January before the court.