Home / World / Brexit plays the lead in manifest May 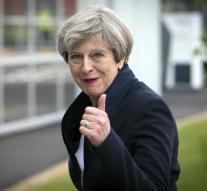 london - British Prime Minister Theresa May presented the election manifesto of its conservative party in Halifax on Thursday. The upcoming British departure from the European Union plays a key role: 'No deal is better than a bad deal for the UK.'

The party outlines the contours of the future relationship with the EU in the document. For example, migration policy must focus on 'reducing and controlling' the number of people entering the country from the continent. Migration in general is also addressed: it has to be reduced to some tens of thousands of migrants per year.

May also wants to raise a fee that companies pay if they hire staff from outside the EU. The so-called Immigration Skills Charge now amounts to 1000 pounds (approximately 1166 euros) per year. Conservatives want to double that amount and use the proceeds to train workers from their own soil.

The document also seems to have to be settled with the view that the Conservatives primarily deal with the interests of wealthy Britons. For example, the party wants to support local governments financially in building more social housing. It is also said that people are 'rightly offended' about the high rewards of some top executives in business.

Public health care (NHS) has to get billions of pounds in the coming years. The manifesto also states that, in negotiations with the EU, it is a priority to ensure that 140. 000 NHS employees from other EU countries 'continue their vital contribution. '