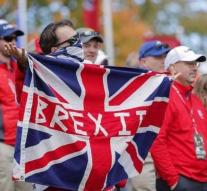 The mayor of Beaucaire, Julien Sanchez (33), is a prominent member of the National Front (FN). That nationalist front strives to leave the EU and the euro, protectionism and against immigration. According to Sanchez pushes the municipality as its respect for 'the sovereign decision of the British people' to leave the EU.

The mayor put his opponents on the radio comfortable with the statement that the street is in an industrial and commercial park and nobody is offended need to take. Some noted surprised that the Brexitstraat is a 300 meter long trail that leads nowhere. Moreover Brexitstraat is sandwiched between streets that are named for the EU's founding fathers, rue Robert Schumann (1886-1963) and the avenue Jean Monnet (1888-1979).

FN leader Marine Le Pen announced that, like the British also holding a referendum on EU membership if she is elected president next year.