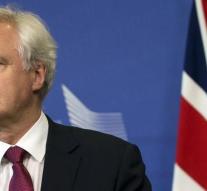 brussels - The first substantive negotiations on the terms of the British departure from the EU begin Monday afternoon in Brussels. After four days of intensive talks, EU chief negotiator Michel Barnier and British prime minister David Davis will give a press conference on the results on Thursday.

The two were together for a month last month and then agreed to 'agree as soon as possible' about the terms of separation. 'Heavy work now begins,' Barnier said last week. The rights of citizens, the financial settlement and a solution to the border between Ireland and the UK Northern Ireland are the three points on which sufficient progress has to be made before talking about the future relationship.

Hard nuts must be cracked. According to Barnier, the UK proposal on the rights of EU citizens in the United Kingdom does not provide sufficient guarantees. According to the Frenchman, the European Court of Justice must remain in charge of their rights while London wants to resolve disagreements by the British court. The founder is that the British government has recognized on Thursday that the United Kingdom has financial obligations resulting from EU membership and that a solution must be found.